"Art has always been the finest product of human activities and the brightest side of any nation's life.  In any civilization, art work, like poetry and literature, has always been a true reflection of man's feeling towards his surroundings, his fellowmen, and mainly his homeland.  In the Arab World, artistic achievements were no exception.  Through history, art has played, and continues to play, a special role."
-Ghassan Masri-Zada 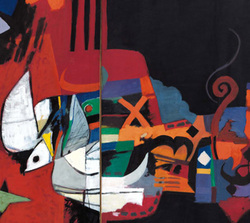 Mathaf: Arab Museum of Modern Art- "Sanjjil: A Century of Modern Art"
Our inaugural exhibition is a remarkable, comprehensive cross-section of art from the Arab world produced over the last hundred years. Sajjil means‘Act of Recording’ and it brings together over 200 artworks from Mathaf’s extensive collection. Here you will find turning-points in artistic thought as it evolved in the Arab world during the century leading up to the 1990s.

The exhibition creates a space for many different stories and experiences and helps set Arab modern art in its historical place within a larger art-history tradition. It also emphasizes the several common moments and concerns that make it possible to talk about a shared identity in the region. 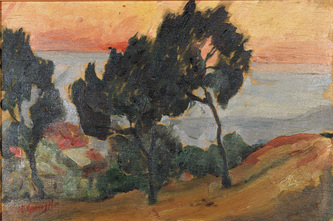 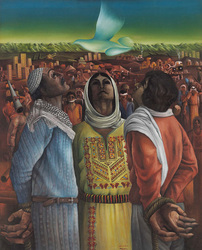 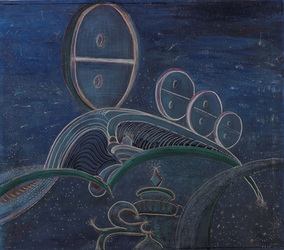 Not only is Islamic architecture spacious and functional, but it is subtle in forms, with symmetrical and decorative interiors.  Examples of Arab/Islamic architectural genius are Alhambra Palace in Granada and the Great Mosque of Cordoba (as seen in the image to the left), the Sultan Hasan Madrasah in Cairo, and the Dome of the Rock in Jerusalem. 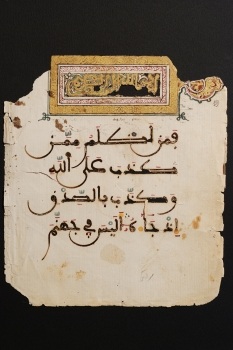 As recent studies reveal, the Islamic book was decorated with paintings very early on in its history. Minimally at the outset, the paintings gradually gained in importance within the heart of the codex. What examples remain suggest that the Koran was the first text in Arabic to have illuminations. Very early on, however, the libraries of the Islamic world were subjected to the great upheavals of history and the little that remains of such a splendid heritage makes it very difficult to reach any definite or general conclusion. Major discoveries, such as the thousands of fragments of the Koran found in the Sanaa mosque in the 1970s have, nevertheless, opened up new perspectives in the history of the illuminated codex of the Arab-Muslim world. Some of these fragments, which can be dated from the second half of the 7th century, contain illuminations that confirm the importance of the late classical heritage, as well as the later Byzantine era, for the early centuries of Islam.